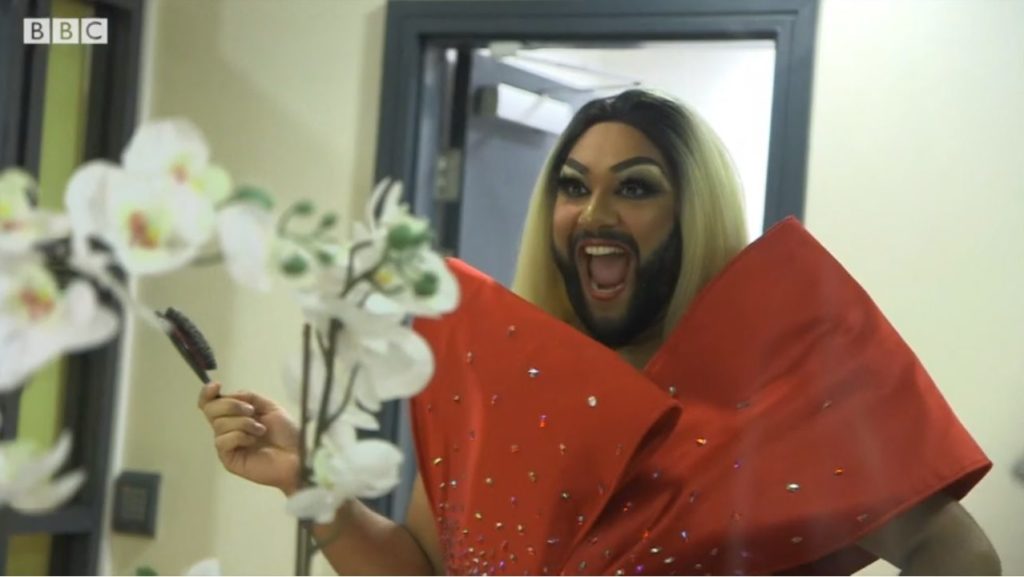 “There are people that are brown and queer and chubby and a little bit different.”

BBC and BBC North West teamed up to create a video celebrating Drag Queen Story Time, featuring drag queen The Nightbus – and now The Nightbus is coming to Z-arts!

“My favourite story growing up was The Very Hungry Caterpillar,” The Nightbus says in the video. “I looked at the book and remember thinking that idea of transformation would possibly really fit in with what would happen in my own life.

The Nightbus was interviewed for a BBC report on Drag Queen Story Time – you can have a look at it here – where they talk about how important it is for kids to be aware that all kinds of people exist in the world. The event is a great way to tell young people – and grown-ups as well – that they can be whoever they want to be, a solid example that there is no “wrong” way to exist.

“I think there are people out there who are ready to embrace a future that doesn’t look like today,” says The Nightbus. “And that’s really powerful and really important.”

On Saturday 25 May Z-arts once again hosts Drag Queen Story Time in partnership with STUN, celebrating the imagination of childhood and connecting children with LGBTQ+ role models of colour. The book for this season’s story time will be Zog by Julia Donaldson and illustrator Axel Scheffler, telling the tale of an unlikely friendship between a dragon and a princess.

Drag Queen Story Time is inspired by a project created in San Francisco. It is exactly what it sounds like – drag queen reading stories to children in libraries, schools and community spaces.  The project invites children and their parents to imagine a world where people are not judged on their appearance or identity.

This event is perfect for anyone who believes young people should be encouraged to embrace difference. It’s increasingly important to show children that they can grow up to be who they want to be, and to provide an environment that is all about diversity, inclusivity and celebration.

So what are you waiting for? The first session is already sold out, so you need to be quick if you want to get involved. Whether you’re a veteran of the drag scene or yet to meet a drag queen, we want to see you there!

Drag Queen Storytime is suitable for ages 3+. There are two performances, starting at 10.30am and 12pm, and individual tickets are all priced at £3.