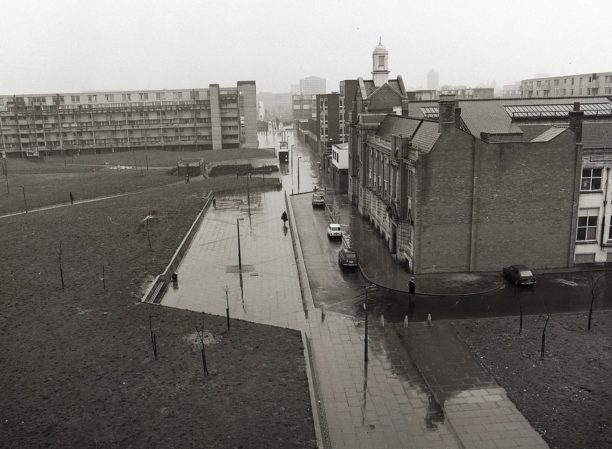 Pavarotti sang here. Warren Beatty used it in his film Reds. And Benji Reid’s Life of a B-Boy was born here, if there’s one thing that’s for sure it’s that Z-arts has a fascinating and eventful history!

A Timeline of Z-arts

1911:  One of the oldest buildings in Hulme, it was built as a congregational Church for Zion Institute – an educational organisation whose principles were based on the teachings of Jesus Christ.

1940s:  After WWII, Hulme was victim to mass clearance and the majority of the community was re-housed in other areas.

1960s:  Congregations shrank to an average of just 20 people per service and Church authorities were forced to rent out the building to other organisations. The Hallé Orchestra and  Choir arrived, followed by Northern Ballet Theatre in 1969.  Both organisations stayed for a number of years. At around this time, Luciano Pavarotti rehearsed at Zion ahead of a Manchester concert with Hallé.

1970s: Church authorities sold the building to the then Greater Manchester Council and rooms were hired to and rented by a wide variety of community organisations.

1988: Ownership of the building was transferred to Manchester City Council, who agreed to pass over a 125 year lease to a new, independent company which would manage the building.

1980:  Z-arts features as a location in Warren Beatty’s film Reds, doubling up as the steps of a courthouse in Chicago. The film told the true story of John Reed, a radical American journalist who left the USA to go to Russia in time for the 1917 Russian Revolution. Producers advertised for extras in the Moss Side Job Centre.

1997: The concept of re-branding at ‘Z-arts’ starts as a group of young people visit the Palace of Youth Creativity in St Petersburg. Work subsequently began on converting Z-arts into a multi-arts facility for young people with a theatre, gallery, radio studio, recording studio centre

2000: Z-arts opens its doors as ‘Zion Arts Centre’ providing arts-based cultural activities to young people in Hulme, Moss Side and Whalley Range. The launch season at included Soul to Soul, Jazzy Jeff and Felix Dexter; Damien Hirst and his pickled shark came to the gallery; Courtney Pine and Nitin Sawhney ran a workshop here. Benji Reid devised his Life of a B-boy at Z-arts. This went on to national acclaim and performed at the National Theatre.

2003:  End of an Era devised and performed at Z-arts to commemorate the move from Maine Rd to Eastlands. Attended by Kevin Keegan. Michael Winterbottom used the venue as he collected research for a film project

2011: The building celebrates its 100th birthday. The Zion 100 programme celebrated the centenary with a different event for each decade every month, winning the inaugural Manchester Community History Award for our engagement with the community. A theatrical promenade performance, Pleasant Sunday Afternoon Society, created for the centenary, can be viewed at this link >>

April 2012: ‘Zion Arts Centre’ officially rebranded as Z-arts, redefining its mission to help inspire and provide creative opportunities for children and families across Manchester and the Northwest.

Zion 100, a booklet about the History of Z-arts and its place in Hulme, written by Terry Wyke and Sharon Forrest is available to buy from front desk at Z-arts.