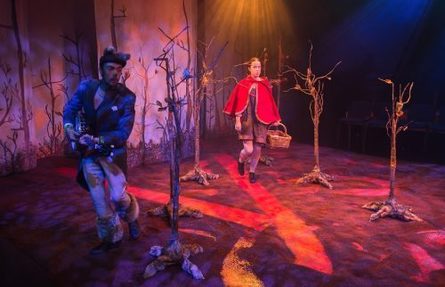 A BOLD  AND HIGHLY THEATRICAL RE-TELLING OF THE WELL-KNOWN CLASSIC TALE PACKED WITH MUSIC, DANCE AND SONG

Z-arts in partnership with Unity Theatre, Action Transport Theatre Company and in association with Brewery Arts Centre are very pleased to announce their co-production this year will be Little Red and the Big Bad Wolf. The family-friendly Christmas show, perfect for ages 5+ and their families, runs from 8 December – 16 December. The production promises to offer the fun and laughter with music, dance and song.

Little Red and the Big Bad Wolf is a bold re-telling of the well-known classic tale, Little Red Riding Hood and will explore the thrill of adventure versus the safety of staying on the path.

“Little Red promises to be a bold and highly theatrical re-telling of the well-known classic tale. The show will build on the success of previous years where we have seen familiar stories told with a twist.”

“After the critical success of Little Red this year we’re really excited to be bringing the show back for new audiences to enjoy, in partnership with Z-arts, Manchester and The Brewery, Kendal. At Unity we’re very much committed to championing high quality theatre for the under 12s, so we’re naturally delighted our show will now be able to be enjoyed by families right across the North West.”

Unity Theatre is Liverpool’s small-scale theatre with big ambitions. Their programme of presented and produced work is edgy, radical and unashamedly contemporary, while their talent development programmes have aided the establishment of many of the UK’s top touring companies including Told by an Idiot, AD Infinitum and Kaboodle. Recent successes have included co-productions with Up the Road Theatre (Bardolph’s Box), 20 Stories High and Theatre Rites (Broke n Beat Collective) Hightide and Soho Theatre (Lampedusa, London, Aldeburgh and Liverpool) and Eastern Angles (Chicken, Edinburgh Festival Fringe, Roundabout), and productions of Chris Gribnall’s Gaffer, Bruce Norris’ Clybourne Park and an international touring production of David Yip’s Gold Mountain.

At Action Transport Theatre we don’t believe children are the future. We know they are the now, the present. Their individual ideas and imaginations are relevant today and inspire and inform everything we do. We work with children and young people as creative collaborators, to make professional and aspirational theatre which we share locally, regionally, nationally and internationally from our home in Ellesmere Port.

One of the leading arts centres in the UK. Presenting a year round programme of exciting, diverse, top quality events and performances, exhibitions in all artforms.