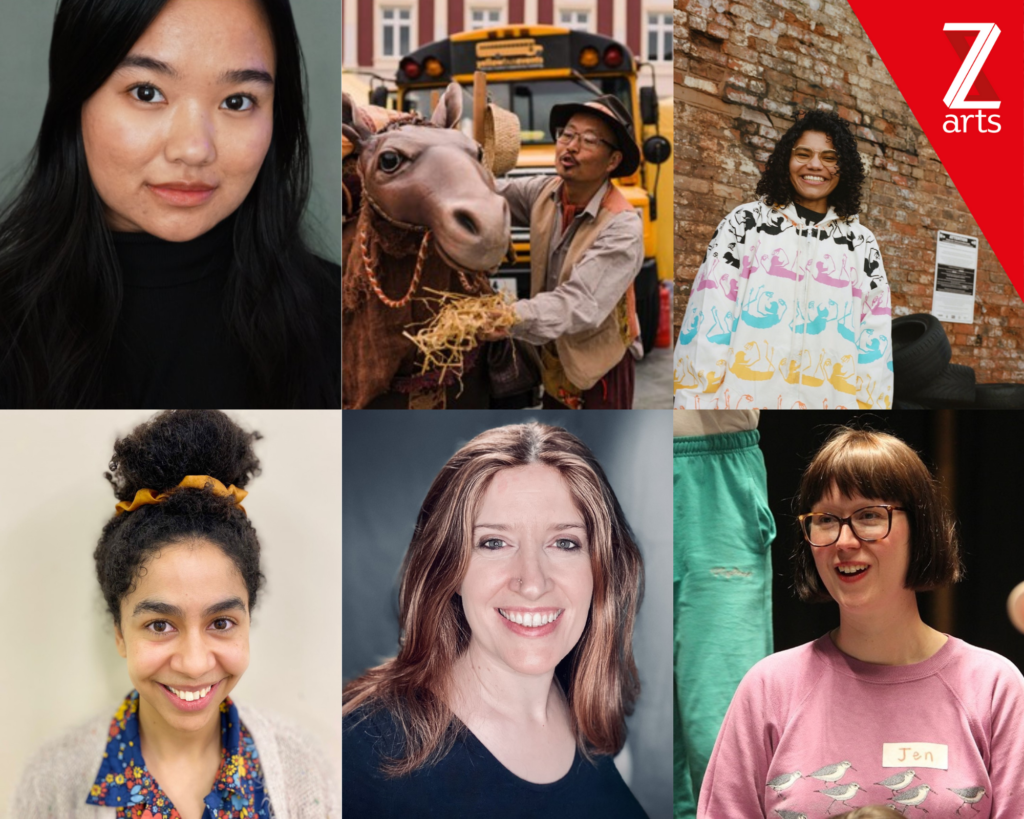 Watch This Space is a development opportunity for artists who want to create work for children and families in the North West. Z-arts will be working in partnership with New Earth Theatre, Young Identity, STUN, TripleC Danc and Lancaster Arts to offer this opportunity. This opportunity offers artists a creative space within the Z-arts building and funding to spend up to three weeks developing ideas. We offer the opportunity to test out ideas to audiences including our Bright Sparks members, take part in an informal sharing at the end of the residency, offer documentation support and advice sessions following the residency.

In December, we collaborated with New Earth Theatre to offer a development opportunity to two artists.

Nadia Anim explored the differences and similarities of movement and games between Malaysian and British culture, as well the very unknown and non-binary in between and experiences of what the two cultures looks like as a hybrid. This third culture world that many mixed heritage children live in is something Nadia explored on a bigger picture. As a Malay-Chinese Indian kid who grew up in a British environment, this was her starting point.

Andrew Kim spent 5 days teaching the basics of puppet movement to 4 British Asian artists based in the north of England. Each day, he focused on one or two styles of puppetry (hand puppets, shadow puppets, rod/tabletop puppets, masks) and lead skill-building exercises and improvs. At the end of the week, the participants shared some of their workshop puppet scenes. This was the start of a larger project where Andrew is starting to train and introduce more diverse voices into British puppetry.

Since January, Z-arts has been collaborating with TripleC and DANC to offer Louise Croombs the opportunity to develop a script with support from writer Cathy Crabb. Louise is a theatre maker and content creator, using comedy, improvisational theatre, clown and storytelling. They perform on various improvisation teams with actors from around the world. Louise is a multi-award-winning radio presenter with 5 gold awards for presenting and journalism.

In February, artist Ella Otomeow worked towards devising a theatre show for children and families around the theme of water. This residency is in collaboration with Young Identity. The aim of the piece was to start a conversation about our relationship to and with nature; particularly for children who live in cities, and how they can connect with and feel a part of nature too.

In March, artist Holly Wright worked on developing a new play based around race, emotions, and creativity. Holly worked with both Z-arts and STUN (Sustained Theatre Up North) as part of this residency. Holly used her residency to write the play and to explore the themes in the space. Holly previously acted in ‘Aleiah’s Adventure’ here at Z-arts.

From March, artist Jennifer Malarkey will be working in both the communities of Lancaster and Hulme to develop work based on place and location and what intergenerational work really means. This residency is in partnership with both Z-arts and Lancaster Arts involving research and development in both locations.

Z-arts are delighted to be working with all these amazing artists and look forward to what happens when we work with great partners and give time and space for ideas to flourish.