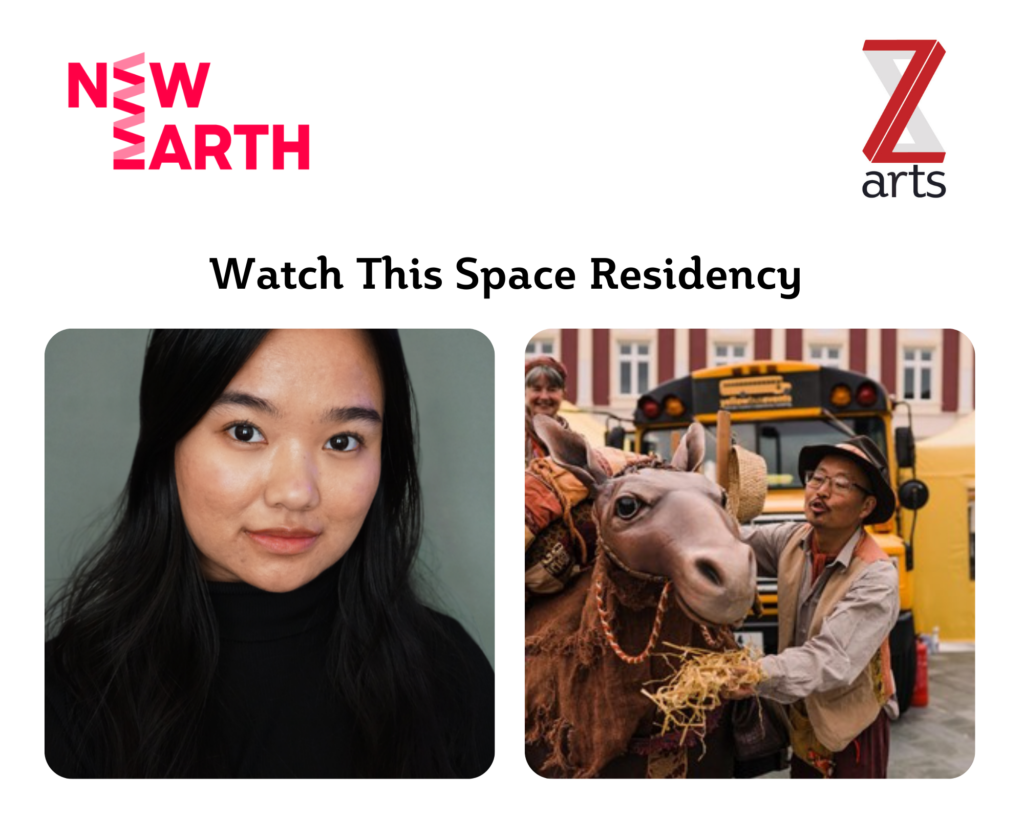 We are very excited to announce our first two residencies for our ‘Watch This Space’ programme here at Z-arts. ‘Watch This Space’ presents a new and unique opportunity for artists to receive funding and space here at Z-arts to develop their artistic practice. Our first residencies are in collaboration with ‘New Earth Theatre.’ We have offered BESEA artists based in the North West this development opportunity who are interested in creating work for children and families. Meet our selected artists here!

Nadia is a Theatre Maker & Performer who aims to tell stories that normalise culture and heritage outside of trauma. Based and raised in Liverpool Nadia started her performance journey in dance, and Musical Theatre, through her time with The Young Everyman Playhouse, she discovered a love for creating her own narratives. Her previous credits include; Liverpool Everyman REP 2018; Tmesis Wicked Women; Fuel Theatre SUMMIT.

RESIDENCY PLAN
In the residency with Z-arts and New Earth Theatre, I would like to explore the differences and similarities of movement and games between Malaysian and British culture, as well the very unknown and non-binary in between and experiences of what the two cultures looks like as a hybrid. This third culture world that many mixed heritage children live in is something I would like to explore on a bigger picture, and the best way I think to explore new ideas is to start with what I know. As a Malay-Chinese-Indian kid who grew up in a British environment, this is my starting point.

Andrew Kim is a puppet maker and performer and the co-director of Thingumajig Theatre (https://thingumajig.info @ThingumaTheatre). Andrew was born in Korea, raised and educated in the USA. He has created and performed puppet and mask plays, parades and events for 30 years. Andrew started with In the Heart of the Beast Puppet and Mask Theatre in Minneapolis, USA where he spent 10 years learning elements of making, performing and directing puppet plays, parades and large-scale spectacles. He trained further working with Bread and Puppet Theatre and studied traditional mask theatre in Korea and Bali. He is the founder and former Artistic Director of the Hebden Bridge Handmade Parade and the Todmorden Lamplighter Festival in West Yorkshire, England. As Thingumajig Theatre, since 2006, he and his wife Kathy have created puppet plays and giant puppets which have performed in 15 countries. Their puppets have featured in many TV programs and a major Disney feature film.

In his residency, Andrew will spend 5 days teaching the basics of puppet movement to 4 British Asian artists based in the north of England. Each day, he will focus on one or two styles of puppetry (hand puppets, shadow puppets, rod/table top puppets, masks) and lead skill-building exercises and improvs. At the end of the week, the participants will share some of their workshop puppet scenes. This is start of a larger project which Andrew is starting to train and introduce a more diverse voices into British puppetry.