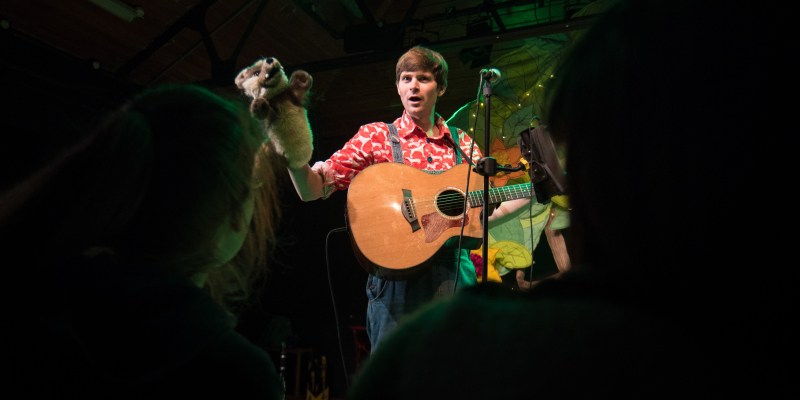 David Gibb, musician and creator of Climb That Tree talks to Z-arts about songs written for adults that make perfect songs for families

Sometimes when I’m listening to the radio, I hear a song which, although written for ‘adults’, sounds like it could have been recorded by some of my favourite artists making music for families today. So here’s a rundown of some of what I like to call ‘secret family music’. (NB. This post contains embedded Youtube videos which may have links to third party adverts).

1. REM – SHINY HAPPY PEOPLE
Whilst REM are arguably more known for their more serious output (Everybody Hurts, Losing My Religion) – I challenge anyone not to feel uplifted after hearing this song. It’s the perfect tune for dancing round the living room. If it still doesn’t put a smile on your face, try the Sesame Street version – ‘Shiny Happy Monsters‘.

2. ANDREW GOLD – THANK YOU FOR BEING A FRIEND
This is a great song for teaching children what it means to have a friend, without ever feeling preachy or, for that matter, too saccharine. It’s also got such a nice groove to it. Apparently a cover version by Cynthia Fee was used as theme to the TV series The Golden Girls which is not a series I’m familiar with, but the original by Andrew Gold is definitely my favourite version.

3. THE RUMBLE STRIPS – MOTORCYCLE
Perhaps a slightly obscure one, but I can’t get enough of this song. What kid hasn’t ever ridden their bike and dreamt that it was a motorbike roaring down the street. Some of us may have even take if that bit further and put an old tin can against the tyre so it made that authentic motorbike engine noise. The Rumble Strips (R.I.P) capture the freedom of childhood and make-believe perfectly.

4. FEIST – 1,2,3,4
1, 2, 3, 4 tell me that you love me more, sings Feist, a.k.a Leslie Feist. I certainly love this song with it’s steady swinging rhythm that builds so perfectly throughout the song, ending in a rousing swell of brass and strings. Be prepared to have it stuck in your head for days.

5. DAVID BOWIE – STARMAN
Most children at some point have dreamed of blasting off into space. Bowie’s Starman – the precursor to his Ziggy Stardust persona – perfectly captures the otherworldliness that makes the idea of space travel so appealing. Also that guitar riff from Mick Ronson is dreamy.

6. SWEET BABOO – WALKING IN THE RAIN
Another earworm and a rather lovely one at that. There’s such a simplicity to this song that makes it almost impossible not to fall in love with. Be sure you watch the video, which is equally charming.

7. THE WHITE STRIPES – WE’RE GOING TO BE FRIENDS
A lovely nostalgic song about the first days at school, and a surprisingly mellow offering from the brilliant White Stripes.

8. NOELIE MCDONNELL – NEARLY FOUR
Irish singer songwriter Noelie McDonnell wrote this beautiful song for his nephew and again it’s its simplicity that makes it so appealing. My favourite line is definitely – “I like to take a pee all on my own” – something which I still do to this very day.

9. STORNOWAY – ZORBING
A song inspired by Zorbing – which is essentially rolling down a hill in a giant inflatable ball. If you can think of a better way to get in touch with your inner-child I’d like to hear it. There’s only one word to describe this song and that’s ‘soaring’. Be prepared to hit repeat.

10. JOOLS HOLLAND FT. SUGGS – JACK O’ THE GREEN
Between Squeeze and Madness, there were plenty of songs that could have ended up on this list, but it’s a collaboration from the two bands most famous members that I’ve decided to include. There’s something wonderfully eccentric and infectious about this upbeat ska tune celebrating the coming of summer, complete with an English country dancing motif, brass bands and maniacal laughter.

So there we have it! Obviously there’s no end of brilliant songs that could have made it onto this list, but I wanted to share a few of my favourites with you. Looking forward to seeing you all for Climb That Tree on Saturday 28 July

(This blog post was originally published by David Gibb on davidgibb.com)