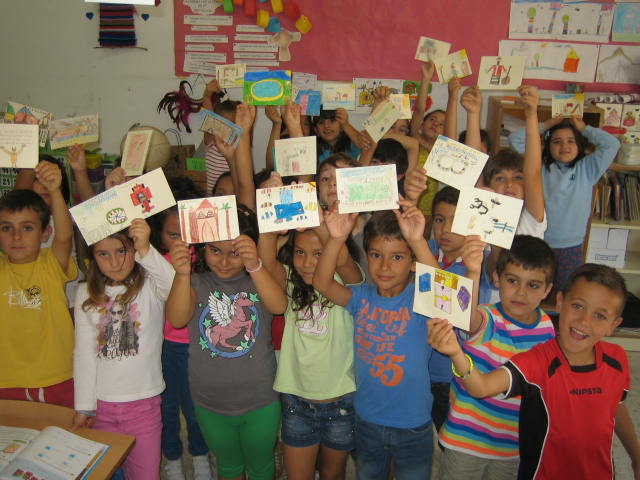 A new anthem for Europe has been composed by 11-year-olds as part of a European schools project in the North West.

Year 6 pupils from Roundthorn Primary Academy have composed a new anthem for Europe with the help of local classical musician Sarah Attar. The piece is the culmination of their part in My Europe – a mass participation arts project incorporating over 300 pupils across Manchester and the North West, facilitated by Z-arts – Manchester’s arts centre for young people.

Developed in workshops taking place over several weeks, the pupils explored European languages and music – from the folk accordion of France and the castanets of Spain to the piano music of Bach and Mozart and French flute music by Fauré.

Performing their pieces at Z-arts on Friday 4th July 2014, the pupils used their voices, bodies and own handmade percussion instruments to sing ‘Hello’ in eight languages from around Europe, perform a rhythmic Spanish challenge, a Hungarian folk fiddle fiesta and a feisty French rap.

The project was topped off with their own composition, European Anthem:

Though our language, food and music
Are not the same we all agree
We live side by side together
In our big community

My Europe teamed 10 North West-based emerging European artists with local primary schools in a mass arts project exploring the region’s multicultural heritage and what it means to be ‘a European’.

My Europe Chief, Z-arts CEO Liz O’Neill said: “When we started this project most of the pupils’ knowledge of Europe was limited to food and holidays. Now they feel much more connected to a European culture.”

Together they explored notions of multiculturalism and what it means to be ‘European’ whilst creating work to present at Z-arts. The exhibition is open to the public for one day only – Saturday 5th July.

In partnership with the European Commission in the UK and Instituto Cervantes and with support from The University of Manchester and Manchester Metropolitan University, Z-arts aimed to encourage young people from across the North West to explore feelings and thoughts on Europe.