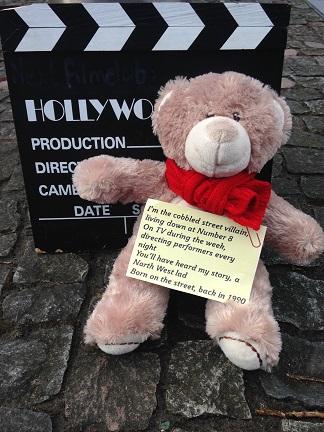 The regional PR campaign continued this month with the release of celebrity bear number 2 belonging to Coronation Street star, Jack P Shepherd. Audiences across Manchester were given clues as to the bear’s owner from a photograph of the bear with a rhyme and visual clues including a cobbled street and an action board.

Many people took to social media to correctly guess and the winner was Christine Mclaughlin. Christine commented: “Michael Rosen is such a wonderful, inspirational writer and his books and I cannot wait to attend the launch!”. Winning the competition means that Christine will receive the bear and tickets for her and her family to come to the launch of Bear Hunt, Chocolate Cake & Bad Things on the 14th September 2016 at Z-arts, where they may even be able to meet Michael Rosen himself!

The campaign continues with a new bear being released every month now, up until the launch of the interactive experience on the 17th September.

Join in online for the chance to win VIP tickets, keep a look on Twitter and Facebook for the celebrity bear for May being released soon…Follow the hunt using the hashtag #Bearhuntmcr