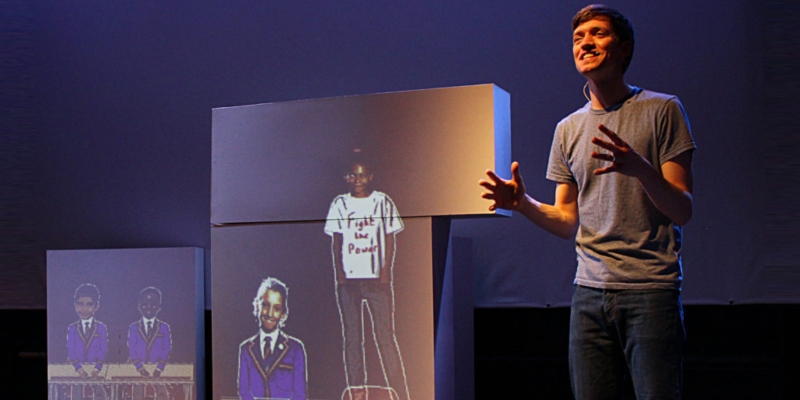 Poet and Rapper Simon Mole came to Z-arts with Friends for All, an interactive spoken word performance for ages 5-11. Whole families were up rapping, dancing and dropping brand new beats as this fantastic show stops off in Manchester as part of its national tour. We spoke to Simon ahead of his performance.

Hi Simon, tell us a bit about yourself!

I’m a writer and performer. If you come and see me you can expect poems about ninja skeletons, raps about pug dogs playing football, stories about boys who meet PacMan and girls who can’t stop drumming.

What do you love most about Friends for All?

I like the more light-hearted and funny parts of the show, but my main hope is that we can open up space for young people to unlock, imagine, and create an idea of what they could or may want to change in the world. It’s so important that we see change as possible, and don’t think of ourselves as being unable to make a difference to the world around us.

A very exciting element of the show is the video mapping, which allows us to project life-size video of the main characters onto big white plinths that I move around the stage. I won’t go into the details or I’ll ruin the magic!

Friends For All talks a lot about standing up for yourself and changing the world. What inspired you to make the show?

I originally created Friends For All as a show that would accompany the V&A’s exhibition “You Say You Want A Revolution?”, exploring the social revolution of the late 1960s. It’s always been a period of history I’ve been inspired by. When I was 7 or 8, I just wanted to rebel. Two examples of my early protests come to mind: 1. Me on the balcony with a home-made hand-drawn “save the snails” placard.  2. Me on primary school non-uniform day rocking my mum’s culotte trousers, just to prove that boys can wear skirts too!

One summer I was poet in residence for a 30ft wooden sculpture of a hippo that was moored on the Thames in Battersea!

What advice would you give to young people hoping to follow in your footsteps?

I’d encourage them to read and listen and write as much as they can and find other people who share the same passion as you.

Could you write us a rap about the show?

Sure, here you go…