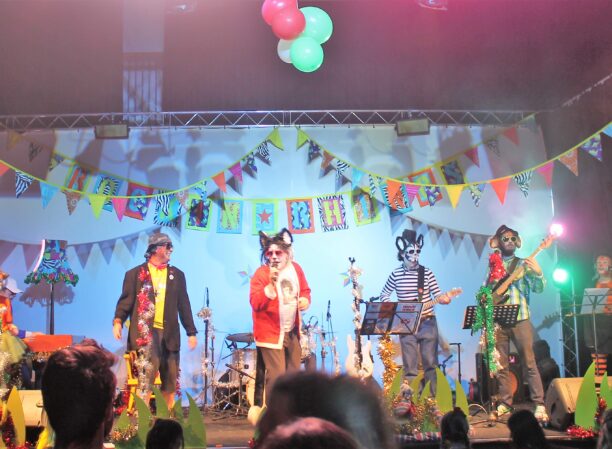 ‘Fronted by John Cooper Cat, The Rockin’ Rhinos are Manchester’s foremost family animal band.  This is music for the under-7’s that grown ups will love too as they mix ska, punk and rock classics with their own songs.  If you like the idea of a real gig – played with guts and soul – where your children will bop with you, and where there’s a bar, then this is for you!

The Christmas Cracker is their best gig of the year where a (not very) Silent Night meets their Little Donkey/Mustang Mary mash-up of and their own Best Wishes.

When The Rockin’ Rhinos say ‘family show’ they mean it.  This isn’t a gig where grown-ups quietly suffer as their kids leap about – this really is for all ages.  The band deliver a real gig – full rock band, lights, the lot performed by animals (naturally) led by John Cooper Cat (featuring Liam Lion on drums).  In the set there are venerable Manchester folk tunes (Ever Fallen in Love by Buzzcocks), Monkey Man, The Ramones little known Blitzkrieg Count and a heartfelt rendition of Starman.  From their own repertoire there’s The Breakfast Song, The Tidy Up Song and The Book Song.  And of course a smattering of nursery rhymes too – you won’t forget the metal/punk version of Wheels on the Bus

This production is socially distanced, and audience members are limited to keep our children and families safe.