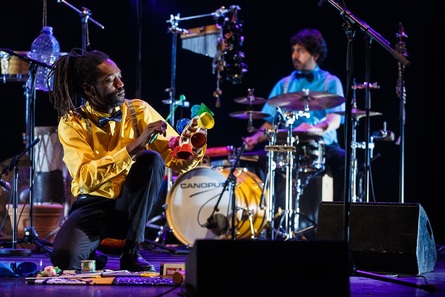 Explore rhythms and sounds of the world with Catapluf, whose imagination takes you to places where music can be found in everything: pans, water, drums, even the body. Catapluf’s Musical Journey includes samba, jazz, klezmer and plenty of audience participation. This brand new show for children and families will visit Z-arts, Manchester for two performances, as part of the Big Imaginations Festival.

Commissioned by the EFG London Jazz Festival, Catapluf’s Musical Journey is a new work by multi-instrumentalist Adriano Adewale (Brazil/UK), aimed at children aged 5-7. Catapluf’s Musical Journey features Jenny Adejayan on cello, Marcelo Andrade and Giuliano Pereira both on saxophone, flute and guitar, Andres Ticino on percussion and Adriano Adewale on – saucepans and everything else.

Catapluf’s Musical Journey’, a live work for 5 – 7 year olds that explores music from around the world and stimulates children’s own music-making and ‘Talking About Us’, a large participatory work based on Children’s Rights, which involved over 200 young people performing in choirs as well as playing horns and percussion

“The children came away from the performance dancing….they keep asking when they can see Adriano again. Captivated by the array of instruments and sounds, within minutes the children were involved…moving and responding to what they could see and hear.” – Sophie McLoughlin, Music Teacher, Latchmere Primary School

Adriano Adewale is a versatile musician, performer, composer and respected educator, Adriano is known for his unconventional and exploratory approach to music and his ability to create magical soundscapes from the ordinary and everyday. He is the leader of Umpatacum Afro-Brazilian band and the Adriano Adewale Group.