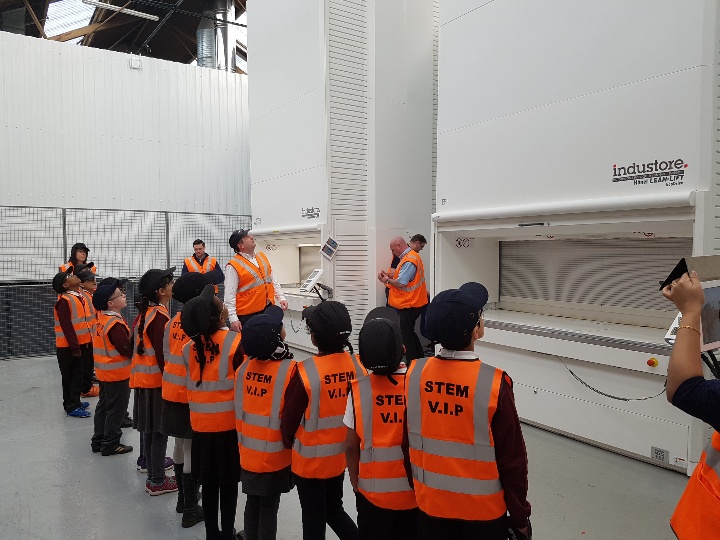 Manchester primary school children visited the Alstom Transport Traincare Centre in Longsight after buddying up with the business to look at the workplace and introduce them to the amazing technology.

A group of 30 children from Webster Primary School who are taking part in the NWBLT Lever prize funded project My Planet visited the Alstom Depot in Manchester to learn all about the services that the NWBLT member provides to the train industry in the North West.

The trip helped the children learn all about the benefits of train travel and what Alstom do within their Manchester depot including the full size train scanner, the fully computerised train parts store, how a train is fully refurbished and many other amazing train facts.

The children took part in scanning train parts using their own hands, driving a model engine, the process of starting a Pendolino, watched an intercity Pendolino tilt , trains getting cleaned in the train wash and even had their lunch in a 1st class carriage.

In January 2017 Z-arts were awarded the prestigious Lever Prize, which includes £10,000 cash and the opportunity to collaborate with some of the region’s most influential business leaders.  The judges awarded the Prize to Z-arts for a brand-new project – MY PLANET – which is a creative arts project aimed at increasing attainment and aspiration for primary aged children living in poverty in Hulme and Moss Side with applied learning that can be used across the region and nationally.   In February the school visited Z-arts to watch Ground Control, a unique performance for seven to twelve year olds with no adults allowed! Ground Control asked its audiences to decide the future of a new planet. Using a giant projection screen and a live, highly intelligent computer it asks participants to decide on an identity for the planet as well as its laws and values.

Alstom Transport who are members of the NWBLT and whose trains provide a third of all UK rail journeys, played host to a visit of Year 4 pupils (aged 8 and 9) from Webster Primary School in Hulme at their Manchester depot. The aim of the day was to help the children decide what forms of transport they would take from Earth to their new planet Modenburg and decide their new transport plan.

“This is the best trip I have ever been on and the children are now considering careers as train drivers.”

Z-arts – Z-arts is Manchester’s only dedicated venue for children and family theatre and the leading partner in Big Imaginations, a consortium of North West venues and promoters bringing world class family theatre to the region. Z-arts mission is to inspire young people through all forms of art and help them begin their creative journey

Alstom In the UK and Ireland, Alstom operates across over 20 sites and employs more than 2,500 people.  Every day, around a third of all rail journeys in the UK are made on Alstom trains. We keep Virgin’s West Coast Main Line service running for around 34 million passengers every year and we service over 100 tube trains a day on London’s Northern Line, carrying nearly 1 million passengers daily. Today, we’re helping to turn Crossrail’s tunnels into a fully operational railway, electrifying the Edinburgh to Glasgow rail line and are helping the UK’s Rail Supply Chain to get ready for HS2.

The North West Business Leadership Team (NWBLT) was launched by HRH The Prince of Wales in 1989, following a joint initiative of Business in the Community and the Confederation of British Industry. The NWBLT brings together leaders of national and international businesses with substantial commitments and interests in the North West of England. A unique regional entity, funded entirely by our members, we work to exert our collective influence for the long term good of the region, economically, environmentally, culturally and socially.

The Lever Prize is now in its 12th year and is judged by a panel of representatives from the North West Business Leadership Team (NWBLT).  Along with a trophy the winner receives £10,000 cash and the opportunity of collaborating with some of the region’s most influential business leaders.  The Lever Prize is an annual award given to arts organisations in North West England who are judged to be regionally distinctive with international or potentially international significance, and who show a high calibre of existing work and can demonstrate exciting future developments. A number of Manchester galleries and organisations have previously taken the prize home – most recently, the Museum of Science and Industry in 2016.